This is a report of the backpacking trip we made in September 2014. We hiked up and camped along Vallecito Creek in the Weminuche Wilderness in southwestern Colorado. See the sidebar for maps and trip planning reference info. After backpacking, we went to the 21st Annual Telluride Blues & Brews Festival .

Taylor and I drove from Amarillo to Durango (7 1/2 hours, 523 miles) on September 5. We had dinner at the Sow's Ear at the Silverpick Lodge. The Silverpick Lodge and the Sow's Ear have changed owners and names are now the The Black Diamond Lodge and the Black Diamond Bar. We stayed in our townhouse at Silverpick by Purgatory at Durango Mountain Resort. We stayed up late, sat on the deck listening to music, and conversed with Messrs. Glenmorangie and Lagavulin.

The next morning, we drove from Purgatory to the Vallecito Creek trailhead (1 hour 30 minutes, 52 miles). It rained off and on while we followed the trail up the river valley. We stopped at a nice campsite in a clearing beside Vallecito Creek (4.1 miles, +1290 feet ascent, -82 feet descent).

This area had excellent high country fishing. There were lots of small brook trout and a few somewhat larger rainbows in the bigger pools. Normally, I return the fish to the water after catching them, but one day, we kept enough for dinner. We skewered them on a stick and roasted them over the campfire coals.

We spent three nights at this very pleasant spot fishing, lounging, day hiking, and watching the fire at night. It rained off-and-on every day and night. On the third night it rained very hard, and water got inside Taylor's shelter and soaked most of his clothing. His sleeping bag got wet as well. The next morning, we decided to head out a day early. We hiked down the creek and returned to Durango.

The next day, Connie flew into Durango to join us for the trip to Telluride. We had a great dinner at Eolus Bar & Dining in Durango.

On Thursday, September 11, we took the 4-wheel drive road over Ophir Pass to Telluride. The scenery along the way was spectacular (By regular roads: 2 hours 15 minutes, 95 miles). The east side of the road is fairly sedate before reaching the pass summit at 12,789 feet. West of the pass, the road descends a narrow, rugged bench carved out of a steep talus slope. In a few places, I had to get out of my stock Subaru Forester, look at the road, and assess whether we had enough ground clearance to proceed. Despite my apprehension, we were able to get down without any problems. Not everyone enjoyed this part of the ride.

Ophir was at one time an almost dead, remote, mining camp. Now it is experiencing a revival, but it remains a tiny, quirky hamlet. We saw this picturesque post office there.

In Telluride, we stayed at the Camel's Garden Hotel , 250 W. San Juan Ave, (970) 728-9300. It is reasonably priced (for Telluride during a major event) and ideally located just a few blocks from the main stage and immediately adjacent to the gondola to Mountain Village.

Late afternoon Thursday, we rode the gondola up to Mountain Village to watch the free Sunset Blues Concert featuring Dragondeer and Ryan McGarvey. We sat on the patio of Siam's Talay Grille , 119 Lost Creek Ln, Mountain Village, CO 81435, (970) 728-6293, which has a nice view of the stage and good food and beverages.

That night, we went to the Bal De Maison show at the Sheridan Opera House to see Amy Helm and the Handsome Strangers. Their performance that night and again the next day on the main stage was one of the highlights of the weekend.

Friday morning, I had a very pleasant run up the Bear Creek Trail to a waterfall.

For the next three days, we listened lots of great music. My favorites included The Robert Cray Band, Dumpstaphunk, and The Meter Men. I liked Buddy Guy's performance most of all. 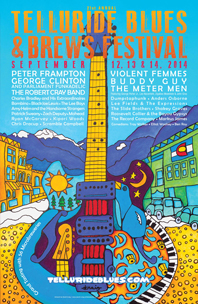 If you have a current Colorado fishing license, hunting license, or CORSAR card it provides you with search and rescue insurance. If you do not have one, consider buying one. The cost for a CORSAR card is only $3.00 for one year or $12.00 for five years. Check the 10th Mountain Hut Association website for more CORSAR card information .