Llama Trekking in the Weminuche Wilderness

This page gives a brief report of our llama trekking and Telluride Blues and Brews Festival trip in September 2009.

We all met at Silver Pick near Purgatory Ski Area . I arranged to rent llamas from Buckhorn Llama Company. Ken Hibbard, who runs High Mountain Anglers, helps Buckhorn with the llamas. He kindly brought the panniers (saddle bags) to us at Silver Pick. On Saturday, we organized and packed our gear and food. When I first looked at our mounds of gear, I thought we would never fit our stuff in the panniers and that we had way too much weight for our llamas. We had one llama for each person. Each llama carries two panniers. Each loaded pannier should not weight more than about 40 pounds. Happily, we had room and weight to spare.

On Sunday, September 13, we met Ken and the llamas at the Pine River trailhead by Vallecito Reservoir. After a brief llama wrangling and packing lesson, we headed up the Pine River trail. The first day we hiked about 5.5 miles before finding an ideal camping spot near the Pine River immediately below the bridge crossing Lake Creek. It had excellent sites for tents, a campfire, and a kitchen. It even had a large pasture with plenty of food for the llamas.

I originally planned to hike up Lake Creek on the second day and to camp near Emerald Lake. National Forest Service regulations prohibit livestock with 1/4 mile of the south shore and 1/2 mile of the north shore. This rule meant that we could not camp close to the lake with our llamas. In addition, we loved our current campsite and none of us were very excited about the steep (2100 feet elevation gain) 4.5 mile climb to Emerald Lake that morning. We spent the second day lounging around camp and fishing.

It rained a lot on this trip. Usually by mid-September there is not much rain or snow in the Weminuche. The summer monsoon season, when it rains every afternoon, has ended and most of the time the big winter storms come a little later. This trip was an exception with rain off and on, day and night for the whole trip. Fortunately, it usually came at times that were not too inconvenient. See the picture above of Connie's remarkably effective and entertaining No-Rain dance. It is too bad we did not have a recording of the accompanying singing and chanting.

The next day we considered a day hike to Emerald Lake but decided that the round trip might be too much for our legs and lungs. Instead, we hiked further up the Pine River to a beautiful park just south of Willow Creek, about three miles north of Lake Creek. This would make a good campsite as well. We successfully fished the Pine River and had a nice lunch before hiking back to camp.

We passed another day in camp relaxing, watching it rain and "dreaming the fire".

On the final day we broke camp and hiked back down the river at a brisk pace. We spotted several deer grazing not too far from the trailhead. When we returned to Silver Pick, we enjoyed a delectable dinner at the Sow's Ear.

The next morning, we parted ways. Bill headed off with his camper for some photography. Cindy and Don had to return home. Connie and I drove over Ophir pass to Telluride for the Blue & Brews Festival.

The rain continued in Telluride. The music was great. The headliners the first two nights were Joe Cocker and Buddy Guy, respectively. I especially enjoyed Sunday evening. Bonnie Raitt and Taj Mahal are touring together. To end the weekend, Taj Mahal played a set, Bonnie Raitt played a set, and then they combined their two bands and played a third set together. At one point rain, freezing rain, and wind blowing onto the stage stopped the show for a few minutes, but soon, the precipitation stopped, and Bonnie Raitt came back on stage and sang I Can't Make You Love Me" (use the controls below to hear a sample). There was enough break in the clouds to the west so that the setting sun could light up the peaks with alpenglow. It was a transcendental moment. 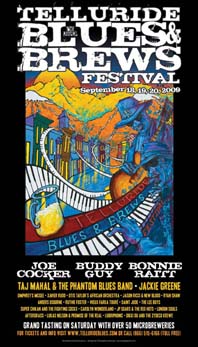