Our trip started off with backpacking in the Noname Creek drainage in the Weminuche Wilderness in southwestern Colorado and finished with a trip to the Telluride Blues and Brews Festival.

On Friday, September 8, Taylor and I drove through rain and light snow to Durango and stayed in my townhouse at Silverpick.

On Saturday, we loafed around Durango to acclimate before hiking up to the high country. We had coffee at the Durango Coffee Festival and drove out to check on my property in the Pine Song development east of town. We had a notable dinner at The Hamilton Chop House at Tamarron Resort (update February 17, 2012: now out of business).

We had to get up early to catch the 9:00 AM Durango & Silverton Narrow Gauge Train and ride from Durango to Needleton. We arrived at Needleton on the edge of the Weminuche Wilderness at about 11:30 AM.

At Needleton, especially in the summer, hordes of people get off the train and hike to Chicago basin. I have nicknamed the trail to Chicago basin "I-14" because it gets heavy traffic from the many people that use it to access the three fourteeners there: Eolus, Sunlight, and Windom. It is a beautiful area that I have visited and enjoyed numerous times over that past 35 years. If you go there don't expect solitude, especially in July and August.

Our plans entailed a less traveled route. We begin our trek north along east side of the Animas River to the Noname Creek drainage. This trail is not described in most Weminuche hiking guides and is not marked on most maps. A description can be found in Gerry and Jennifer Roach's book, Colorado's Thirteeners, 13,800 To 13,999 Feet, From Hikes to Climbs . See the sidebar to for maps and guidebook excerpts.

The start of the Animas River trail going north from Needleton is braided and difficult to follow. Once beyond the meadows just north of Needleton, the trail follows the river and is much better defined. The hike requires a climb up and over the much maligned Water Tank Hill. The view from the top is nice and the difficulties over-rated. We went down the steep part going in and up it going out without much difficulty even though the trail was muddy and slick.

As the Animas River trail approaches the alluvial fan at the mouth of Noname Creek, it again becomes braided and difficult to follow. Just north of Noname Creek and south of an old utility pole with an insulator on top, we camped at a choice site next to the Animas River. Without trying to move very fast, we reached this point, 2.4 miles from the start, in about 2 1/2 hours.

In the past, the Animas River had no fish at all north of its junction with Cascade Creek. In the 1990's, a major cleanup of the mining sites along the river north of Silverton was completed. The fish have now returned as evidenced by Taylor's success.

The next day, we traveled up Noname creek to Jagged Cabin where we spent the next two nights. The cabin is in very poor repair with a roof that is full of holes. The view up the valley is dazzling especially when the sunset alpenglow lights up the peaks.

At the cabin, we had a pet deer. This young looking doe hung around our campsite and showed very little fear of us. She sneaked off with Taylor's hiking stick, chewed up the grip, and left it at least a hundred feet away from our campsite. Surprisingly, we saw no marmots despite several large talus fields nearby.

The next day we hiked further up the valley along the approach route to Jagged Peak. I hope to climb this peak next summer. The southwest entrance of the meadow at 11,600 feet along Noname creek would make a great campsite.

We had planned to day hike to Lake 12552 and then up to the pass between pass between Peak Five and Peak Six. We ran out of time negotiating the steep step below the lake. I have been to this pass before. It affords an absolutely breathtaking 360° panoramic view of the San Juan's.

After a second night at Jagged Cabin, we retraced our steps back down Noname Creek and again camped by the Animas River where we spent the first night. On the way, we saw some bear scat on the trail that contained remnants of honeycombs. The next day we had any easy hike back to Needleton and the train.

Click here to see a photo album from the festival.

Connie drove in from Amarillo and was in the Sow's Ear Bar at Silverpick when we got back from the backpacking trip. We had a nice meal at the newly expanded restaurant there. The next morning, we drove to Telluride via Silverton and Ouray. Low clouds and snow obscured our view on the normally picturesque drive.

This is the third year in a row that Connie and I have gone to the Telluride Blues and Brews Festival . We accidentally discovered it two years ago when we happened to be in the area when it was going on. It is held outdoors in the Telluride Town Park in mid-September each year. The venue is spectacular. Telluride is surrounded by resplendent mountains that are usually covered with blazing colors of yellow, orange, and red from the Aspen trees at this time of the year.

The music starts on Friday afternoon and ends Sunday evening. Although there is plenty of blues music, there is a wide variety of other rock, jazz, and other genres typically with a decidedly southern and particularly New Orleans flavor. The headliners this year were Lou Reed, Bruce Hornsby, and John Mayer. Each year I have been, I am blown away by one or more bands that I see there that I've never heard of before. Check the Telluride B&B website to see some of the artists from previous years and you will see names like Robert Cray, B. B. King, The Neville Brothers, Joe Cocker, Los Lobos, and John Mayall just to name a few.

Connie, Taylor, & I enjoyed the music Friday afternoon and evening. Cindy and Don joined us on Saturday.

Saturday from 1:00-3:00 PM is the time for the Grand Tasting. For two hours, festival goers can sample over 100 different beers from fifty different microbreweries. Limiting the all-you-can-drink beer tasting to two hours keeps the party civil and prevents the development of a drunken brawl. After tasting about ten different wheat beers, Odell's Easy Street Wheat remains my favorite.

Here is a sample of some music by Joey Gilmore who performed Saturday afternoon. I had never listened to his music before, but his performance in Telluride was one of my favorites. Sunday morning, Connie, Taylor and I drove back home. Don and Cindy got to stay and watch John Mayer on Sunday evening.

If you want to attend the Telluride B & B Festival, plan ahead. Tickets usually sell out before the first day of the festival. The hotels in Telluride fill up early. Tickets can be purchased online from their website. Be sure to bring warm and waterproof clothing and plenty of sunscreen. 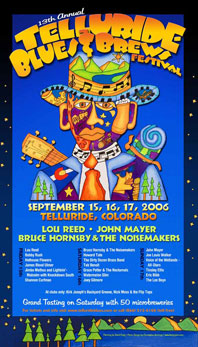